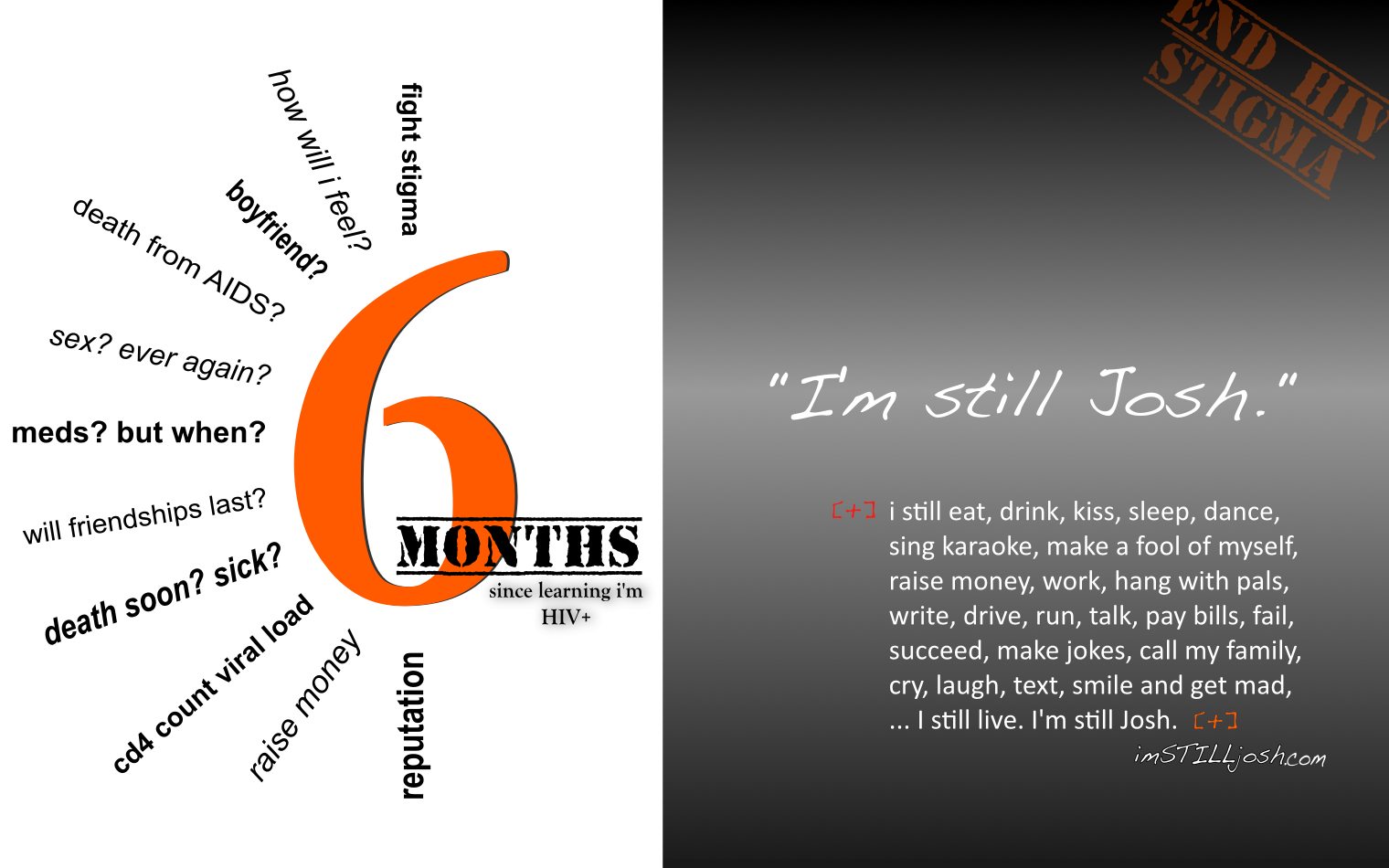 Six months ago, Jan. 24, 2012, my world stopped. It’s when I received the result of a 2nd blood test (a confirmation test) that I was HIV-positive.  Now, six months later, I am still doing exactly what I made the decision to do– continue living and being exactly who I have always been… Josh. Over the past several months since starting this blog, I’ve experienced tons of different things… tons of emotions, really.  I’ve cried out to God asking “Why me?” and had to look in the mirror and realize I made a choice that had a consequence on December 18, 2011. I’ve looked my family in the face and told the truth. I’ve called the person that unknowingly exposed me, notifying him of my result and helping him get connected with the awesome folks at Nashville CARES.  I’ve tried to tell my story in a way that helps other recently infected guys around Nashville to maybe not feel so alone. I’ve continued working. I’ve taken more needle pricks than I ever thought I would. I’ve been committed to trying to help raise as much money in town as possible for HIV awareness and social services for HIV-positive folks, like me. I’ve tried to help the enourmous task of chipping away the HIV stigma that is very real and present in the South. I’ve worried.  But I attempted to always “keep on– keeping on.” I’m STILL living.

Health | If you remember, I had a viral load of over 5.5 million in January and it started to slowly decrease. The lowest I’ve gotten in the past six months was amazingly 800. And my CD4 count has remained strong (over 550 with increasing percentages). With the counsel of and discussion with my physician, I haven’t yet started any medicine or antiretroviral therapy (ART). However, I just read an online news piece recommending that all adults with HIV-infection begin ART. We’ll see… I’m STILL living.

Relationship | bow chicka wow wow — As many of you that follow my facebook or twitter accounts know, I am currently in a relationship with an awesome and caring person. This was probably the biggest worry that I had when I knew in my “gut” that I was HIV-positive during the several weeks from the first HIV test until the confirmation of the result— Would I ever be LOVED by someone even though I’m HIV-positive? Luckily for me, I know the answer is a big “hell yea!” While adhering to the laws concerning the disclosure of my status, sex can still happen (even with HIV negative partners). I’m not one to talk much about “my sexy time” but I did want share that much. I’m STILL living. Friendships | A good friend of mine that works in HIV vaccine research told me that I would really learn who my true friends are and that I would begin to really make better choices about who I choose to spend time with because of a new view on life– per se.  He was absolutely right. As a whole, close friends have remained exactly by my side. And some new ones have emerged.  Whether it’s because everyone knows my business (haha) because I’ve been so open and blunt about everything OR because they are genuinely awesome folks, the local Nashville guys have been pretty nice.  Come on now, we are gay men– folks talk about everyone. I’ve heard a few whispers. It’s hurt a little, but at the end of the day, I would make the same decision to start talking about being HIV-positive again. No question.  My friends are still who they always were. I’m STILL living.

I told you early on that I was still Josh (that being HIV-positive wouldn’t change that) and that you should still be you! Thank you for doing exactly that!

Life happens, fortunately and unfortunately. And we are completely in control of our response– how we adapt and how we decide to take it on. Because I was in a place mentally and spiritually that I felt comfortable talking about MY HIV, I did and will continue. This isn’t brave. It’s exactly right for me. For those of you that are HIV-positive and for whatever reason (family, friends, work, or that you are just a tad bit more quiet about personal things), I admire you and support you. You are being exactly who you are!  For those of you that just can’t talk or disclose but want too– know I am yelling loud to “end this HIV STIGMA” for both of us and I plan to continue.

It’s not about making HIV seem less serious OR even attempting to make acquiring this terminal illness “fine and dandy by me.” It’s ABOUT ending the nasty looks (we see it), the “dirty” comments (we hear them), and the ignorance about how it’s spread or treated. This blog is about decreasing stigma surrounding HIV and increasing the self-confidence of those HIV-positive folks that need encouragement.  And y’all know me, I have enough southern in me to “open a can of WHOOP ASS on somebody” if need be… Of course! I’m still me.

I ain’t dead yet — don’t plan on it anytime soon. I’m still living.

P.S. If you’re interested in sharing your HIV story (even if it’s the first time), please connect with me on facebook.com/joshuarobbins … 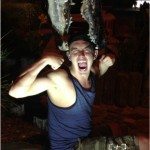 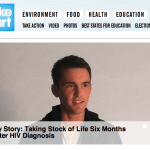