Y’all- I am truly humbled and excited to be able to feature a guest blog, although anonymous, from the guy that unintentionally and unknowingly exposed me to HIV on December 18, 2011.  Since I started this blog and also shared my youtube video that has good and not-so-nice comments on it (haha), I have wanted to share the story of this brave guy.

WHY SHARE HIS STORY, you wonder?  After almost a year of living with HIV, the 2nd most common question I encounter is “Do you know who gave it to you?”  And I have shared before, my story is special and I feel lucky because my timeline of events is so specific.

This guest blog will be presented in two parts, with special content available exclusively on Out & About Newspaper‘s website, later this week.

Written anonoymously from a Nashville guy (at the time of exposure):

I’M THE GUY THAT EXPOSED “IM STILL JOSH” TO HIV

“It was mid-day and my phone rang. The caller ID read Josh Robbins.

Imagine that feeling you get when you didn’t realize you were going 90mph on the hwy and you pass a cop. Doubtful that Josh was calling after 6 weeks for “round 2”, intuition told me that this could not be a good call.*  I let it go to voicemail. His message was thoughtful but urgent and I stepped outside to inhale a cigarette before calling him back.

THE PHONE CALL FROM JOSH.

Our conversation was almost too cordial. Josh told me that he’d tested

positive for HIV and that I needed to go get tested. He went on to explain that it wouldn’t have been possible for him to contract from anyone else. If it was from me, he said that he didn’t want to harbor any animosity towards me. I think my response must have been similar to if my mother had called at 7AM on a Saturday to tell me to go to the dentist, “Yea… of course I’ll go. Talk to you later”.

I spent the next 29 hours pretending to live my life normally, all the while meticulously observing every moment and every aspect of my life. I’m not sure if I was trying to visualize how it all would be different if I tested positive or if, [subconsciously] knowing the truth already, I was trying to salvage the last hours of a carefree life.

When I finally made it to Nashville Cares, I had envisioned every possible outcome, good and bad. I was mentally prepared for a positive test result. And believe it or not, when it came, it was more of a relief than a blow. I could move forward now. I could take action. I was no longer stuck between knowing and not knowing. Don’t get me wrong, it wasn’t happy news… but I knew I was going to be ok.

The next night I sat across from Josh in his kitchen. We discussed the night we met, how we thought this would or wouldn’t affect our lives, disclosing to friends, family and future partners. I couldn’t help but think about his bedroom a few feet away, that night, that condom that was a little too tight. This was the scene of the crime!

You might picture a scene where I fall to my knees begging for forgiveness and pledging eternal servitude for my wrongdoing, but Josh would hardly allow me to apologize. At a time when I could have been comforting him, I was the one actually being uplifted and encouraged.

Unlike Josh, I did not decide to fully disclose my status. Though my parents have always been and would be 100% supportive, I felt that they would only fear for my well being. I have yet to tell them. I work in a hyper-hetero and hyper-masculine industry and do well enough just being out of the closet. I felt it was in my best interest to keep quiet there as well.

Unfortunately, disclosure, for me, wasn’t just about letting folks know. There were people that needed to know because they needed to be tested. This would be the hardest part of my transition into “Poz-Life”. (imstilljosh.com notes that the following examples were allowed to be posted by this guest writer because of the anonymity of the examples, regardless of the future disclosure choice(s) of this writer. We do not share any specific information about the status of anyone without extreme respect for privacy.)

In the end, I’ve told my sister, my closest friends and anyone I’ve had or planned to have sex with. A tip to anyone newly positive, don’t wait until 3rd base to disclose… guys don’t like that!

I’m ok with my level of disclosure for the time being. Even being closeted, as it were, I have plenty of opportunity to support those that are questioning their status or are newly positive. More than once, I’ve held someone’s hand at Nashville CARES during that unnerving 30 minutes between mouth-swab and results. I am happy that I can be there, no matter what the result.”

PART 2 will be released on Thursday January 17, 2013 presented by Out & About Newspaper.

* denotes the phone call was actually on Jan. 24, 2012 (approximately 5 weeks from exposure)

SO – HOW WOULD YOU REACT to HIM? Obviously, it “takes two to tango, right?” or is one person more at fault? Share your thoughts/comments below. 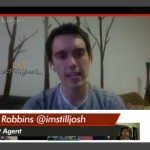 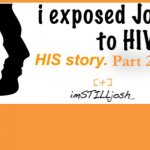