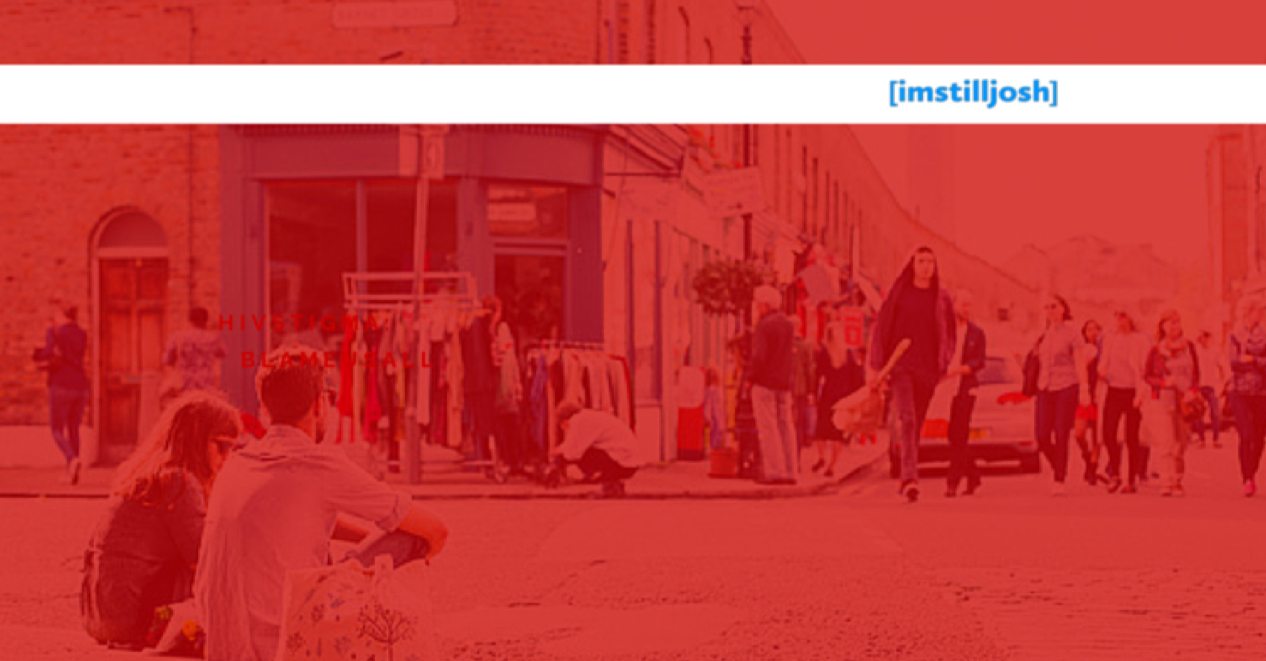 Imstilljosh is all about stomping out stigma.

But stigma toward people with HIV isn’t coming just from the uninfected – it’s coming from within the HIV-positive community itself. (Tweet this.)

“What’s wrong with these guys who don’t take their medication or go to the doctor? Addicts! Denialists!”

“Did you hear about so and so? He’s not undetectable. Obviously he’s got problems. Probably drugs.”

It’s really not as simple as all this. And little understanding would go a long way.

Given a new survey by the Kaiser Family Foundation, this level of ignorance really isn’t so shocking. More than three decades into the HIV epidemic, infection rates among gay men once again are on the rise. In fact, men who have sex with the men are the only group where rates of infection continue to increase, up 12 percent between 2008 and 2010 overall. Among younger gay men between 13 and 24, the statistic is even more shocking – up 24 percent.

Is it any wonder the older guys and longtime survivors are, for lack of a better way to put it, seriously pissed off? Especially after burying so many of their friends?

Yet who doesn’t want to have sex in the raw? Straight people do. We’ve got PrEP, we’ve got medicine for the infected. Why should gay men be denied the pleasure of sex without condoms? Are we going to live in fear forever?

“If you’re talking about dividing up the community of people who are positive, it is happening,” said Raquel Bernaldo, a psychosocial care manager at the Los Angeles LGBT Center, in an interview with imstilljosh.com.

Different people within the HIV community have different needs, she explained. But she said that to put these various groups into a hierarchy, such as those who are undetectable, or with the most “moral righteousness,” at the top; those who “don’t disclose and don’t take meds” and are at risk of infecting others, or catching STDs at the bottom, “is an oversimplification of what’s going on.”

Seldom does someone with HIV appear sick these days. It is sort of “out of sight, out of mind,” Bernaldo said. But stigma still exists, and there’s an emerging need to better serve specific groups, such as women, she said. Instead of everyone being broadly stigmatized for having the disease, individual communities each have different ways of judging the infected.

“People in all liberation movements need to name themselves,” Bernaldo added. These days, groups exist online and in person for blacks with HIV. Asians with HIV. Newly diagnosed with HIV. Elderly and HIV-positive.

“But we shouldn’t force people to identify,” Bernaldo said. Instead, the health care system needs to support all of these vulnerable groups.

From The Eyes of Those Who have Carried Caskets

When it comes to older people with HIV, putting one’s self in their shoes helps to better understand their frustrations. (Tweet this.)

Most new HIV cases are occurring among men who have sex with men between the ages of 13 and 24. The virus has been around long before these people even were born.

Even for 24-year-olds, people already had been dying of AIDS 10 years before they were born. By the time they were old enough to pay attention, HIV already had transitioned away from a menacing disease that distilled widespread ignorance.

By the same token, unenlightened sentiments and even downright ignorance about HIV still is pervasive in many underserved or unenlightened communities.

The Kaiser Family Foundation has produced a timeline of key milestones in the HIV epidemic. It includes things such as President Reagan’s first acknowledgment of AIDS on April 1, 1987. By then, more than 4,000 people, mostly gay men, already were dead from the disease.

Consider if dozens of your friends already had died from a killer disease six years before the president of the United States had even acknowledged it. Some people were afraid to shake the hands of people with HIV.

What do they see now, 30 years later? Thousands of gay men continuing to get infected each year. So many older people with HIV endured humiliation, discrimination and worse as they educated an ignorant nation about a disease that stigmatized entire communities.

Some of them are just plain insulted by what they see.

Today, many of those people infected in the 1980s have progressed to AIDS. They have very little money because they were sick, and many of them disabled, during their prime earning years.

Retirement came early and unwanted. Many of their friends are dead. Life can be boring, particularly in Los Angeles, which honors youthfulness and beauty.

A New Generation of Infected People, Whether They’re 18 or 65

On the flipside of people who have been living for decades with HIV/AIDS are the newly diagnosed. These days, those who are newly diagnosed usually are reassured that everything will be OK, and for many people it is.

But not for everyone. And what makes the longtime survivors the angriest is when the newly diagnosed don’t seek treatment. (Tweet This.)

At the Los Angeles LGBT Center, anyone who receives a positive diagnosis is immediately sent to the mental health clinic inside the center for counseling.  Everyone is offered six free counseling sessions.

“Some say, ‘I don’t know why they sent me up here,’ Glenn Lindsay, a mental health counselor at The Center, told imstillljosh. “They say, ‘Yes, I’m HIV-positive and I didn’t expect that today, but I’ve got friends and family to talk to and I’ll be fine.’”

Then there are those who are in total shock, complete denial and do not intend to tell anyone. Those often are first clues that a person may not want to seek treatment. “We want to keep them engaged in the system, so they get on medication and hopefully become undetectable,” Lindsay said.

And it’s not just young people who are newly diagnosed anymore. Sometimes it’s men in their sixties or older, who possibly contracted HIV while high on crystal meth, trying to be young again and “go all night,” Lindsay explained.

He said one client recently contracted the disease from a prostitute. The client is so disturbed by the diagnosis he doesn’t even want to tell his wife about it. Some people just brush the diagnosis under the rug and forget about it as long as they can. For them, that’s much easier than seeking treatment, Lindsay said.

Not Undetectable And Unable to Find the Way There

Many people who spoke with Imstilljosh for this story talked about feeling stigmatized for not having an undetectable viral load. Often, people assume a person cannot get to undetectable because they’re not taking care of themselves. Sometimes substance abuse is to blame.

And there is evidence that substance abuse can make a person not take their meds. It’s no secret among some mental health counselors at The L.A. Center that HIV medications are being sold on the street. Not only are positive patients selling their meds because there’s a market for Truvada taken as PrEP (some men buy it on the black market to take before all-night sex parties as opposed to going to their doctor for a prescription, counselors told Imstilljosh). Truvada as PrEP is supposed to be taken once daily as directed by a doctor.

Some HIV-positive people distrustful of the health care system will buy medications on the black market to treat themselves. They may not want to be seen at an HIV/AIDS clinic in their community, or not want to give their name to health care providers.

Still others get diagnosed and do get into treatment, but they still don’t see the needle move to the “undetectable” status that so many seek and that is often thought of as “the new negative.”

Dr. Otto Yang, an HIV doctor with the University of California Los Angeles, said he personally has not seen stigma directed toward people who can’t get to undetectable. But he told imstilljosh, “There are certainly times when physicians have such patients and fully believe that they are doing everything right with their medications.  People can vary a lot in terms of how they absorb and metabolize medications, so sometimes it has to do with being unable to have high enough levels in their system even when they take them.  Sometimes we just don’t know why they aren’t working.”

He said most physicians will stop prescribing HIV medications if they aren’t working. In theory that should prevent those who don’t take them as directed from continuing to obtain and sell them on the black market.

Can’t We All Just Get Along? The Los Angeles LGBT Center’s Efforts to Pull Everyone Together

Percivel Pandy is program coordinator for Positive Images at the L.A. LGBT Center. Positive Images is a curriculum-based behavioral intervention program aimed at keeping people who test positive in treatment.

“We talk about things like disclosure, higher self-thinking, goal-setting…we really build the whole person and whole individual, it’s not just about your HIV,” he told imstillosh.

Several factors compounding an HIV diagnosis can act as barriers to treatment, he said, including substance abuse and loneliness.

Many people have a difficult time talking about their status with potential partners upon receiving a diagnosis, Pandy said, and Positive Images helps with that, too. “Some feel like disclosure should be mandatory with everybody, some are hardline and don’t want to be thought of as a threat and will only sleep with other positive guys.”

Pandy has seen the issue of disclosure turn members of the positive community against one another in group discussions. “Some say disclose and get it over with. Some say as long as I’m wearing a condom, that’s risk reduction, and don’t disclose. Some say I’m not going to tell everyone at the bathhouse because it’s not their business. Others sit on the fence.”

With stories about younger and older men getting high together on crystal meth and spreading HIV not at all uncommon, it’s no wonder finding a real connection can be difficult. “Some have a fear about being HIV-positive and being gay, and don’t have many resources.

“They’re homeless and have no jobs. There’s shame, classism. We’ve heard over and over again, people are interested in having a genuine connection with someone who will lead them through.”

The Center is in the process now of creating a buddy program that Bernaldo hopes will do just that. 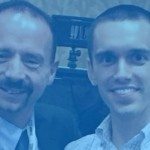